skip to main | skip to sidebar

Interesting books and magazines  with details of  American  and  Australian soldiers  and  airmen  based  in  North Australia  during  the  Second World War  have come our  way . Of  particular  note  is the  January   1943  issue of  the  American  National Geographic  Magazine with a  well illustrated  article by  roving  photographer-writer   Howell Walker -American  Bombers Attacking from  Australia .
While the text does not specifically mention places by  name  in Australia , the accompanying  above  map  is  full  of  place  names .  One  photograph , below  ,  shows  500lb bombs camouflaged by  the  distinctive magnetic  anthills typical  of  the NT ; another  photograph  showing  men digging  a   trench says it has to be in Queensland  as  it  is  in  a cotton field , the only place where cotton is grown in that country . 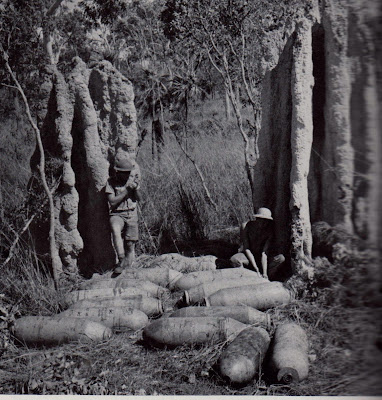 After  reaching Australia, Americans,  Howell wrote ,  acquired the Aussie habit of drinking lots of  tea  , and liking it . "Their regular tea parties helped pass  time while they were waiting  for word  to get  going on the next mission," he continued  .  A local welfare room, run by  friendly ladies supplied  tea for a small charge , because it was hard to get during the war, but  they donated  all the bread  for toast and sandwiches , and made  cakes  with  their  own  hands .
The tearoom only admitted men in uniform at any time between 10 in the morning  and 10 at  night and  American airmen   could  be  found  at  the  tables . 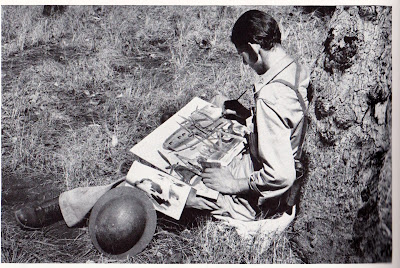 The  superb pictorial coverage includes the  above shot of a  co-pilot who liked  painting bombers, his  art adorning an American officers' recreation  room in Australia .
The  Flying  Fortress  Tojo's  Physic  gets a  special mention . Howell went on a  six bomber  raid  on the Japanese base at  Lae , New  Guinea, during which they were attacked  by  Zeros . The caption on a  photograph says  it is of  men in "the bush " lined up at a tent for a physical examination,  far removed from  a comfortable Australian town , in the wilderness  camped in tents  among gum trees, anthills and  indelible red dust.


NOTE : Howell  Walker  came to the Northern  Territory  after the  war  , in 1948,  on  assignment for  the National  Geographic Society covering the American -Australian  Scientific  Expedition   into  Arnhem  Land .

Lockwood logs in : Upon reading the above post ,  Melbourne  journalist  Kim  Lockwood responded  by saying he  has the autograph of Howell Walker, obtained in the early  1950s, who was  a  regular  visitor  to  the Top  End . Kim also pointed  out that the anthills in the wartime article were not of the so called magnetic  kind . They  were, he said , common-or-garden anthills .The magnetic variety  have flat sides, with their sharp edges pointing  to magnetic north and south,which no one had adequately explained, going  on about the flat sides with east and  west faces, soaking up the sun . These  anthills occur mainly in the latitude of  Adelaide  River.
Posted by Cyclops at 11:23 PM

You are visitor number 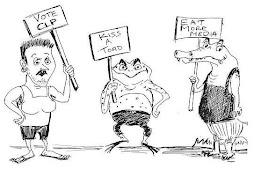